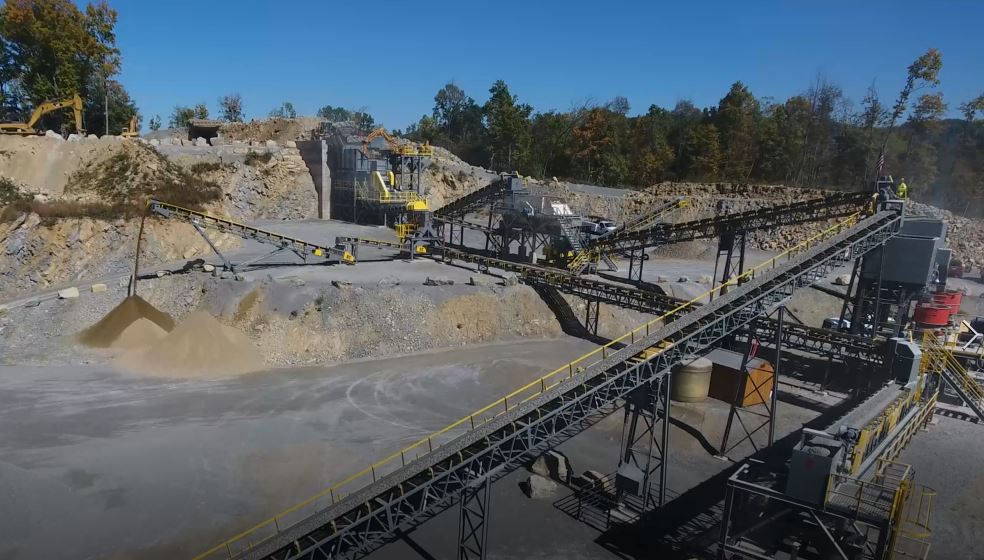 Conveyors are essential to quarrying, mining, and mineral processing operations, but we sometimes take them for granted. Did you know that it was not so long ago in human history that these hardworking machines didn’t exist? Imagine your surface or open-pit mining operation without any conveyors— things would not be moving very quickly or efficiently, and the whole undertaking would be much more dangerous!

To show conveyors a little appreciation, we’re looking at their history from their roots in the late 1700s through decades of improvement and innovation that transformed them into the reliable machines we depend on today.

And if you have any questions about conveyors or how our conveyor systems might benefit your operation after you finish reading this piece, please feel free to reach out to us!

If conveyors have a single inventor or first installation site, the passage of time has sadly lost that information. What is known is that while Henry Ford made conveyors famous with his automobile assembly product lines in the early 20th century, he did not invent them (as many people incorrectly believe). He just improved upon old technology.

Various sources point to 1795 as the year when conveyors first appeared. These early conveyors were short, made from leather belts and wooden beds, and were hand-operated. You would most likely find them in ports to move agricultural products from shore to ship.

As the Industrial Revolution took hold in Great Britain during the 18th century, and then a little later in America, the phasing out of manual labor in many production environments began favoring steam-powered machinery. Steam power was the “hot” new tech at the time!

Less than a decade after the initial creation of conveyor belts, the British Navy put the first steam-operated conveyor into use. The year was 1804, and while you may think this new, machine-driven conveyor would have endured the challenging task of loading ships, it operated in a bakery that produced biscuits for sailors to eat! In any case, this improvement with steam technology meant that conveyors no longer had to be hand-cranked, making them more useful for more applications.

Machine-driven conveyors caught on quickly and began appearing in all sorts of industries, though it would still be almost 100 years before they would work in mining operations. Railcars were still the preferred method of moving aggregate and coal from within mines to surface operations for much of the 1800s. However, this preference began to change as new belt materials like rubber and steel appeared.

Some sources report that early conveyor belts used rubber, although this material certainly wasn’t ideal. It was prone to change based on temperature, becoming stiff and rigid in cold environments, or melting and getting sticky in warm temperatures. These problems lasted until 1844 when inventor Charles Goodyear patented vulcanized rubber.

His innovation made rubber a much more stable substance that didn’t react negatively to temperature changes. Eventually however, the mining industry turned to steel conveyor belts. Sandvik was the first manufacturer to produce these belts beginning in 1902.

It wasn’t until a few years later, in 1905, that mining engineer and inventor Richard Sutcliffe would introduce the first underground conveyor belt, made from layered cotton and rubber. At that time, the food production industry widely adopted steel belts. In contrast, rubber-covered belts became the norm in mining, quarrying, and mineral processing due to their superior durability and flexibility.

Rails are Out, and Conveyors are In

With Sutcliffe’s underground conveyor belt, mining and quarrying were revolutionized over the following few decades, as massive quantities of material could now move from the extraction point with much less labor. No longer did expensive rail lines need to be laid and maintained. And when a mine’s LOM (expected life of the mine) was over, a conveyor was much easier to pack up and remove than a rail line, which was pretty much permanent.

However, it did take some good publicity to popularize conveyors, as news of technical innovations didn’t spread as quickly back then as it does today. Plus, it was not as easy to purchase and set up conveyors in the early days as today, where all you need to do is call Kemper Equipment for all your conveyor needs.

In 1908, inventor Hymle Goddard patented the first roller conveyor, and things started moving. Henry Ford famously began using conveyors on the assembly lines in his Ford Motor automobile plants around 1913, and problem-solvers in countless industries began refining conveyors and inventing new types. In the quarrying, mining, and mineral processing industries, conveyors quickly replaced the locomotive and rail lines throughout the 1920s until the outbreak of war in the 1940s.

Several 20th-century conveyor innovations have gotten us to where we are today. America’s involvement in World War II slowed mining and quarrying at home. Still, wartime was great for conveyors – the rubber shortage spawned the first synthetic belt materials during this time.

The rapid growth in the post-war American economy in the 1950s spurred even more conveyor improvements. For example, the turnover conveyor belt system was patented in 1957, reducing the costs of running conveyors continuously, thanks to improved belt longevity. Another major conveyor innovation was the invention of the telescopic conveyor in 1992 by Thor.

The Present and the Future: Computerization and Customization

In recent years, computerization has made conveyor belts more reliable and easier to work with in quarrying, mining, and mineral processing operations. Conveyors are now “smart” automated systems and can alert operators to maintenance needs. They can also run, stop, and change speed in response to programmed commands. Computerization has led to more customization of conveyor systems to achieve the exact outcomes mine and quarry operators need.

Indeed, finding the right conveyor for your needs now often involves customizing a system that can efficiently and economically move material from the extraction point to stockpile and beyond, no matter what challenges the mine or quarry site present.

In the future, better machine learning and artificial intelligence (AI) will likely refine conveyors to reduce maintenance and breakdowns and remove more direct human oversight while work is underway. The result will be increased safety in our mines and quarries, as well as increased efficiency.

Curious about what modern conveyors can do for your operations? Here at Kemper Equipment, we are dedicated to finding the best conveyor systems to revolutionize your mining and quarrying projects. Get in touch with us now to talk about your conveyor equipment requirements and goals.