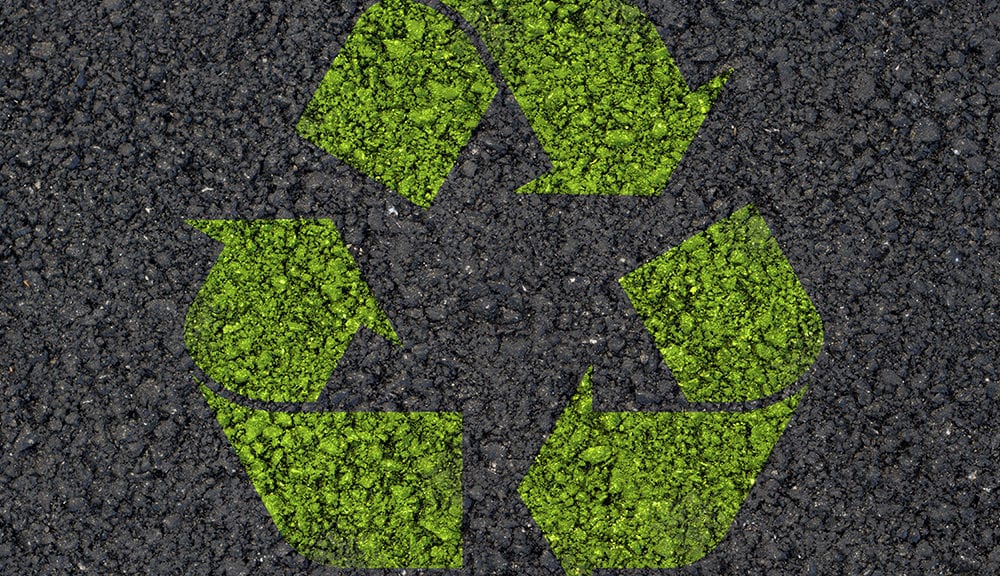 In the quarrying and mineral processing industries, it’s true that we are often working with mined “virgin” materials extracted straight from the earth. But if you’ve been involved with many projects over the years, you know that every mine has its expiration date (expressed as LOM, or expected life of the mine), and even the most productive quarries will eventually be depleted.

The good news is there’s a source of aggregate that is considered sustainable because it will always be plentiful and available – recycled asphalt, or reclaimed asphalt pavement (RAP), as it’s more commonly known in the industry. RAP has been growing in popularity among paving contractors, and that means more work for crushing and screening operations that can properly size the material for use.

What is Recycled Asphalt?

Recycled asphalt is exactly what it sounds like – asphalt pavement material that has been removed from paved surfaces like parking lots, driveways, and roads, and reprocessed to be used again in new paving installations.

Every asphalt surface you see in the world around you is 100% recyclable, and because asphalt surfaces have a finite lifespan (typically lasting around 15-20 years with proper care and maintenance), they must be replaced from time to time.

The crumbling asphalt that’s removed from worn-out surfaces is still valuable for repurposing even though it can no longer be used in its original format. And this is why asphalt is actually the single most recycled product in the United States (and has been since at least the early 1990s).

Recycled asphalt is in demand

Because the use of RAP in new road projects saves taxpayer dollars and is environmentally friendly compared to using virgin materials, the Federal Highway Administration (FHWA) has taken a particular interest in promoting asphalt recycling. In coordination with the National Asphalt Pavement Association, they also track how much is used and stockpiled across the country at the end of each calendar year.

Reporting shows continued, steady growth, with about a 36% increase in the amount of RAP being employed in new paving projects across the US between 2009 and year-end 2017 – great news for those who process and stockpile this material.

What is the process for making Recycled Asphalt?

Recycling asphalt involves removing the material from its original installation, which may be done by a paving contractor or even by particularly industrious homeowners. The asphalt is broken apart into large chunks that then make their way to a recycler or other processing operation, usually via truck transport.

Depending upon the system being used for recycling – either hot mix applications or hot in-place recycling (HIPR) – the large, rough pieces of asphalt will need to be broken down at an RAP processing plant prior to the new installation.

What equipment is needed?

With recycled hot mix applications for new pavements, which represent the most popular method of asphalt recycling, RAP must be processed into granular material via crushing and screening operations so that it can be mixed with a certain percentage of virgin materials to achieve the best results in the finished product. This means that the equipment needed for RAP processing generally includes a crusher, screening units, conveyors, and at least one stacker for stockpiling.

The FHWA provides the following guidelines on processing to create the best RAP output for use in new installations:

“The processed RAP used in recycled hot mix asphalt should be as coarse as possible and the fines (minus 0.075 mm (No. 200 sieve)) minimized. Gentle RAP crushing (controlled crusher speed and clearance adjustment on exit gate) is recommended to minimize the fracture of coarse aggregate and excess fines generation.”

What are the Common Uses for Recycled Asphalt?

As we already touched on, recycled asphalt is widely used in new pavement installations, from publicly funded road projects to your home’s driveway. In fact, it may be nearly impossible today to find new asphalt that doesn’t incorporate recycled materials into the mix, and that means those materials aren’t being landfilled.

What are the Pros and Cons of Using Recycled Asphalt?

In addition to the fact that it’s considered “green,” it’s true that there aren’t many negatives to using recycled asphalt, though the recycling method employed may have some drawbacks. Overall, asphalt recycling may save about $30-$80 per ton in producing new asphalt, as we discussed in a previous blog post, but this can vary depending on whether HIPR is used over traditional hot mix applications.

How asphalt is recycled matters

HIPR can sometimes offer significant cost savings to contractors and taxpayers, as it cuts out RAP transporting, processing, and stockpiling – essentially, the old road surface is ground up and processed on site as the new road surface is installed. HIPR is self-contained and allows for total recycling of the asphalt surface, but it’s not suitable for any other use cases than road projects in which the roadway itself has no structural deficiencies. Utilizing HIPR also limits the contractor’s ability to make changes to the new asphalt mix.

The constraints that HIPR puts on new installation projects means that it’s not often chosen over traditional hot mix applications. So, it’s safe to say that RAP processing operations are not in danger of becoming obsolete anytime soon.

Kemper can help you with your RAP plant

If you’re setting up a new RAP processing plant, your best bet for selecting the proper equipment and optimizing operations is to consult with design/build and engineering professionals like our team here at Kemper Equipment. Get in touch with us today to talk about your RAP production goals and expectations.